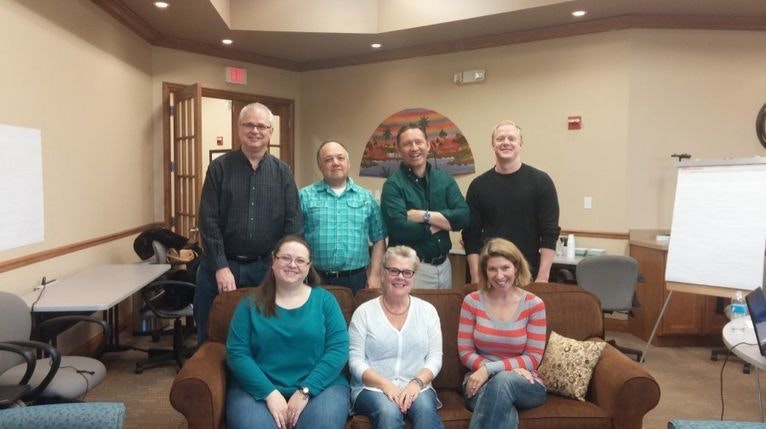 When you write a script for Kids Corner not only must you develop a substantive, biblically-based message that shows kids their part in God’s Big Picture, you’ve got to wrap that message up in story that's clever, entertaining, compelling, humorous, and above all else, fun. That requires a great deal of imagination and talent. During a recent KC writers summit, the talent in the room almost breached the levee. ReFrame Media brought KC writers, voice actors, and production engineers all together for the first time. The purpose of the summit? For writers, new and old, to gather together to meet the larger KC team and brainstorm ideas for next season's Kids Corner episodes.

“God's got a plan,” says senior producer, Ron Vandenburg. “One of our recent goals was to find new writers who could bring some experience and a new energy to the show. Our friends from Keys for Kids suggested John Fornof, who is a very experienced writer and producer, having worked in both television and radio.” John has written, produced, and directed projects like The Extraordinary Adventures of G.A. Henty, The Red Rock Mysteries with Chris Fabry, Down Gilead Lane for CBH ministries, and Adventures in Odyssey the popular radio drama from Focus on the Family.

“In turn, John recommended Kathy Buchanan,” Ron continues. Kathy loves teaching about the unique story God writes in each one of us. She’s written dozens of Adventures in Odyssey episodes, six novels for children and teens, a teen devotional, and three nonfiction books for pre-teen girls on the spiritual, emotional, and social aspects of growing up. At the summit, Ron introduced John and Kathy to longtime KC writers Jim Jordan and Josh DeGroot, and principal voice actors, Aimee Lilly, who plays the show’s main character, Liz, and Kris Jousma, the voice of Liz’s friend, Lucille. “It was a great experience for everyone to meet each other,” shares Ron. “Together, the writers, actors, engineers, came to share their ministry visions for KC.”

Great story idea after great story idea poured forth as the writers pitched narrative and teaching concepts. Constructive brainstorming resulted in even stronger storylines. As senior producer, Ron challenged the writers to go deeper with story; great storytelling is the main tool for teaching spiritual truth at Kids Corner. He shared with the team a foundational structure that will undergird every new KC episode: what it truly looks like to be a disciple of Jesus. Inspired by the work of Doug Monsma and a team of educators from the Prairie Centre for Christian Education, Ron identified to the group certain discipleship characteristics called “through-lines” that provide a common language to define what it means to be Christian. “Think of them as photographs,” describes Ron, “that show biblical Christian qualities such as God-worshiping, servant-working, justice-seeking, idolatry-discerning, and image-reflecting.” These concepts resonated right-away with the writers and cast. “We will tell stories where children can explore what it means to be a disciple of Christ, that God is the God of all things, that sin has made things broken, but God fixes things through Jesus, and He’s called us to be witnesses!”

Ron and his team anticipate a series of outstanding new KC episodes this fall. With such a deep well of talented writers, actors, and production crew, and built on solid, biblical rock, these episodes might be some of the best the show has ever produced. “Don’t miss them!” exclaims Ron.

And you don’t have to. Subscribe to Kids Corner and get weekly updates right in your inbox.