Touring China With a Purpose 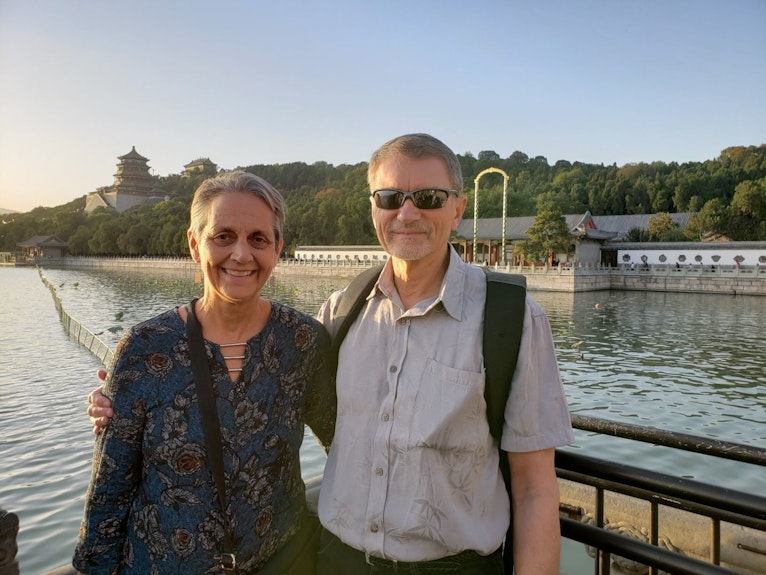 A sermon about Paul’s missionary journeys might speak differently to you when you hear it in a foreign language on the other side of the world.

That’s what members of ReFrame Ministries’s (BTGMI) “Tour with a Purpose” group experienced in China. The 12-day tour included BTGMI leaders and 14 ministry supporters who wanted the opportunity to gain an understanding of life as a Christian in China as well as BTGMI’s ministry there.

“That service was really emotional for me,” says Mary Vander Werp (pictured with her husband, James). “We had just visited a Buddhist temple, so my heart was breaking after seeing people pray and kneel to gods made out of wood.”

“At the church service,” Mary continued, “we heard a sermon[through a translator] about Paul in Athens, talking about the ‘unknown god,’ [Acts 17:23] it just really made an impact on me.”

Learning Everything. . . and Nothing

None of the tour guests had been to China before. Still, many had long wanted to travel there as supporters for BTGMI’s Chinese ministry as well as for personal reasons. For Vandewerp, it was both.

“I attended a church that supported [BTGMI’s] Chinese ministry, so I’ve been interested in it for some time,” Mary says. “I also have three granddaughters who were adopted from China.”

Mary and the other tour members traveled to three major cities—learning history, seeing tourist sites, and hearing perspectives from local Christians. While they learned a lot about the culture, tour members also realized that the variety of perspectives made it difficult to generalize.

“There is a saying about China,” said our director, Kurt Selles, who helped guide the tour as a former missionary to China. “Everything is true in China and yet nothing is true.”

Still, one theme from both Christians and non-Christians emerged—uncertainty. For Christians, this uncertainty stemmed from an increased level of pressure from the government on churches.

People need the Gospel now more than ever.

“People need the Gospel now more than ever,” says Jerry An, BTGMI’s Chinese ministry leader. “Many church leaders shared that message with us. But in a quiet and low key sort of way.”

On the tour, An introduced guests to some of BTGMI’s key ministry partners, sharing ways that media has helped spread the gospel despite uncertainty including social media channels and a book of testimonies written by Chinese Christians.

Mary already shared what she learned on her flight back to the United States. While in the air, she sat next to a young woman from China who was currently studying in the US.

“She told me she was Catholic, so I wondered if she was interested in some of BTGMI’s Chinese ministry resources,” Mary said. “We’ve since become Facebook friends and I sent her the book with testimonies.”

Shortly after receiving the book, the young woman sent a response to Mary:

“Thank you for the book. Those stories are quite encouraging and interesting.”

Although BTGMI has not hosted a Tour with a Purpose group in about 10 years, Selles says he can envision the next one to be in 2021.

“We had some interest from people who weren’t able to go on this trip,” says Selles. “So we are still deciding if we should go back to China or somewhere else where media ministry reaches,” said Selles.