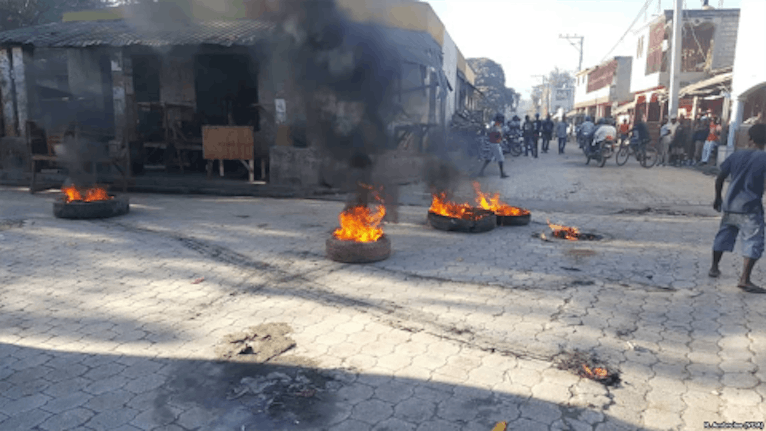 PBS reports that “violent protests in Haiti may create a humanitarian crisis”.

Rev. Jacky Chéry, BTGMI French ministry coordinator in Haiti, sent this report: “By the grace of God I am well and our staff also is well. Three of our Back to God staff have been at the office today.”

He also reported that from February 7 to 15, they were all confined to their homes or shelters, often with a shortage of resources. “We could not go anywhere for nine days because of violent protest and riots all around the country. It was worst in our town of Port-au-Prince. The political leaders in opposition to the government call this movement ‘Operation Lockdown Country’."

According to Rev. Chéry, the Haitian people—because of misery, unemployment, and corruption in the government—are asking for the president to resign. The president refuses so large crowds of thousands and thousands of people took to the streets protesting, breaking things, burning tires, vehicles, businesses, and anything at their reach. “A lot of people have been wounded, and officially the count is 10 people killed” (as of February 20, 2019).

The BTGMI staff in Port-au-Prince has been able to keep in touch with volunteers scattered across various places in the country. “Praise God, they are all safe and sound.”

Beginning Friday, February 15, BTGMI Haiti staff in collaboration with another evangelical organization, the CEEH (Council of the Evangelical Churches in Haiti), invited the church leaders to open the doors of their churches from 6 AM to 8 AM for any person who desired to come and pray for the country. More than 3,000 pastors were motivated to do so all around the country.

Rev. Chéry asks the people and churches in North America to join them in prayer. “We have no guarantee about the next days to come. Keep us in your prayers. Haiti needs your prayer.”

Specifically, he asks prayers for: