Movies as prayers? An interview with Josh Larsen 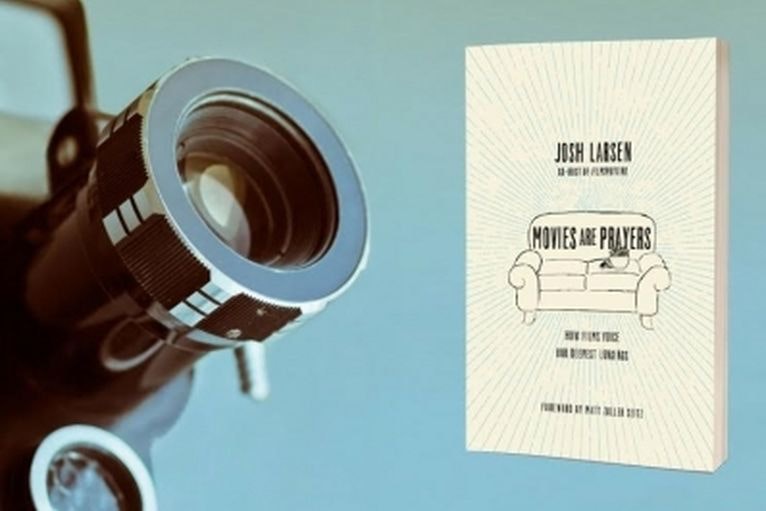 Our own Josh Larsen, editor of Think Christian, recently published a new book through InterVarsity Press. It’s called Movies Are Prayers: How Films Voice Our Deepest Longings. A fan of film from a very early age, Josh has written as a film critic in the newspaper business, co-hosted the podcast, Filmspotting, and posts regularly on his own site, larsenonfilm.com. Yet, it was his work on TC that inspired his reflection that movies are cries of the heart to God. I took an opportunity to ask Josh a few penetrating questions his book. Here’s what he had to say.

Movies as prayers? What inspired that idea? I began to notice that certain movies were expressing the same things that I shared with God in my prayer life: cries of lament, moments of confession, expressions of praise. The more I explored Christian examples of prayer, from those offered in the Bible to those in our traditions and liturgies, the more this seemed to be the case, so I started to look at certain films more closely in this way.

How did your work with Think Christian contribute to your concept that movies are prayers? Because of Think Christian’s Reformed way of seeing culture as a gift from God—something to be discerned, yes, but not demonized or feared—it was really the perfect place to do some of this exploring, to examine how movies might, through God’s common grace, also function as forms of prayer. Not all of the articles I’ve written at TC have taken this specific approach, but the opportunity to approach movies with this sort of enthusiasm and grace certainly fostered it.

What are a few good examples of movies that are prayers? Often it is a specific scene more than an entire movie that serves as a form of prayer. I think of the moment in Toy Story where Buzz Lightyear, who insists that he’s an actual, flawless space ranger, watches a television commercial that reveals he is, in fact, a toy that can’t even fly. There’s a wonderful image of the face of the commercial Buzz being reflected in the glass helmet of the actual Buzz, forcing him to confront and confess what we all must: that we aren’t the perfect heroes of our own fate, but flawed creatures claimed and redeemed by someone else (in Buzz’s case, his owner Andy, who has scribbled his name on Buzz’s foot). That’s one of my favorite examples, but in the book I also write about Close Encounters of the Third Kind as a prayer for yearning—our desire to connect with the God who can often feel beyond us—and Rebel Without a Cause as a prayer of anger, in which we strike out against the very figure (in James Dean’s case the understanding cop played by Edward Platt) who is there to protect us.

Is there a limit to how much a movie can be considered a prayer? For sure. Sometimes films that seemed like they might work as a form of prayer turned out not to be very fruitful when I revisited them. But this is very subjective, as all movie watching can be. A film that speaks to me as a form of prayer might not speak to you in that way, and vice versa.

How might movies with gratuitously graphic content be prayers? For Christians who enjoy exploring an art form like the movies, a good question to ask is not so much what exact content might be in a film, but how is a film using that content. Exploitatively? Descriptively? As a word of caution? And of course this can be subjective too. What I might find exploitative, because it’s harmful in my own personal faith walk, another Christian might find descriptive of the movie’s context. This is where discernment comes in, which although very personal is also best done in community: with a spouse, group of friends, or even a movie club at your church. Others can help hold you accountable if your own discernment starts to go off track.

To read more about Movies Are Prayers from Josh Larsen himself, and to read an excerpt, check out this article at Think Christian.

God at Work in Russia