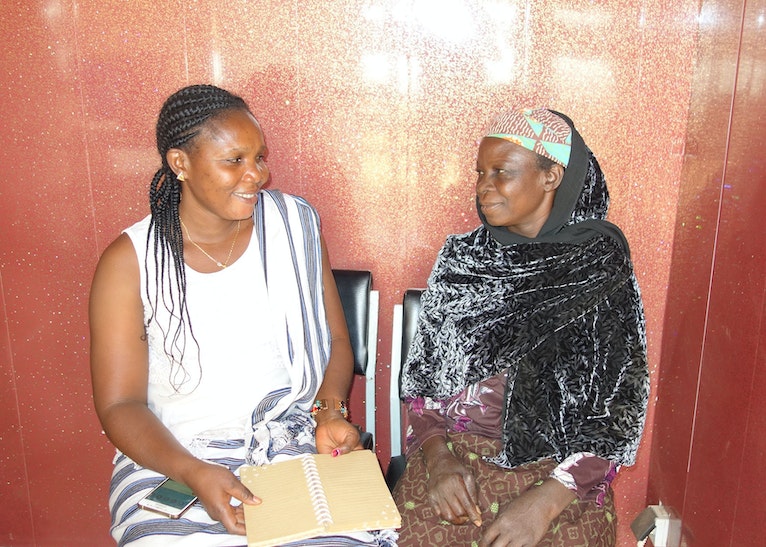 Loraine’s life journey gives her a strong witness of Christ’s love in her Muslim community in Burkina Faso.

“I was born into a Muslim family,” said Loraine, who asked that we not use her real name. “In 2008, I became a Christ follower through a friend. She kept telling me about Jesus. That same year I met my husband, who was also a Christian. He encouraged me to join the church he attended.”

“In general, when a Muslim gives herself to Christ, relationships with the family become complicated,” explained Rev. Marc Nabie, French-language ministry coordinator for ReFrame Ministries (BTGMI) in Burkina Faso. That was true for Loraine.

“When my father realized my conversion, he beat me and forbade me to go to church,” said Loraine. “Still, I went. My father whipped me and put his hand in my eye sockets to put out my eyes so I wouldn’t know the way to the church. The neighbors managed to save me but I was badly wounded. They had trouble removing the clothes I was wearing, since my whole body was sores.”

Even today Loraine still has scars on her back and in her right eye.

“Stories like Loraine’s are why some people hide their faith from their family. In some cases, they can attend church but quite discreetly. Where that’s impossible, they remain in contact with the faith through Christian media like ours,” said Nabie.

BTGMI seeks to develop healthy relationships in Muslim countries, to lift up Christ rather than speak against Islam. It began French ministry in Burkina Faso in 2015, partnering with Timothy Leadership Training Institute (TLTI). TLTI already had an established ministry with local leaders in the capital city, Ouagadougou.

The media outreach has expanded to three radio programs broadcast throughout four regions, and the ministry team has added a website and Facebook outreach. Nabie also consults with a new BTGMI French media outreach begun in 2016 in Niger, which is 99 percent Muslim, and where Christians and Muslims live in peace.

People, including Muslims living in this area, are responding to the gospel messages.

Loraine, who now works with Nabie in the Ouagadougou ministry center as office assistant, often meets with listeners who come to the center for prayer and encouragement. She has special understanding and empathy for Muslim women seeking Christ.

“God gave me grace,” she noted.

After Loraine’s father learned she had graduated from high school, he reached out to her. Loraine was the first one in the family to achieve this educational milestone and he wanted to share her joy.

“I was still afraid he wanted to beat me again, but my mother convinced me to go home,” said Loraine.

God allowed Loraine to reconcile with her family. “From that day I was free to exercise my faith in Christ. Nevertheless, there are always others who call me pagan, but that does not prevent me from living my faith. Praise God I am saved, and I am happy to carry my cross.”