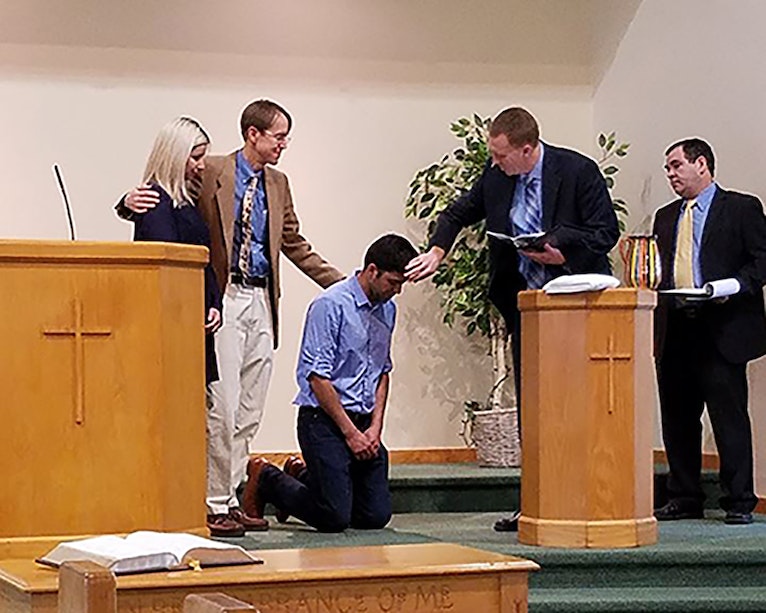 As Pastor Joel Vande Werken packed up his study a few months ago in preparation for his move to Whitinsville, MA and Fairlawn CRC, he picked up a Cada Dia devotional booklet in Portuguese. He thought for moment about adding the booklet to the “give away” pile, but decided to pack it with his other books for the move. “I don’t speak Portuguese, but I thought that maybe I’d have the chance to give this to someone,” he recalled.

Hernandes Dias Lopes, Portuguese ministry leader for ReFrame Ministries, had shared with BTGMI board members some of the Cada Dia (Every Day) devotionals that he had authored. Joel was serving on the board at that time and had received one. The Cada Dia booklet traveled with Joel and his family to Whitinsville in the fall of 2017, but the devotional didn’t remain in his new study at Fairlawn CRC for long.

Fernando Garcia moved to the Worcester, MA area from Brazil when he was a young adult, nearly 15 years ago. At that time he connected with the youth group of Fairlawn CRC in Whitinsville. That connection was renewed recently, and Fernando began attending regularly along with his wife, Pamela Araujo Garcia, who also moved to Massachusetts from Brazil.

When Fernando and Pamela were introduced to Joel after church one Sunday this past fall, a light went on in Joel’s mind. “I have something for you,” he said, and he quickly retrieved the Cada Dia devotional from his study.  Fernando saw the name of the author, “Hernandes Dias Lopes?” he said. “I just listened to his podcast yesterday.” Joel explained the link with ReFrame Ministries, and Fernando was surprised and impressed that such a well-known minister in Brazil was connected to the Christian Reformed church he was attending in Massachusetts.

Joel pointed Fernando and Pamela to other resources from Luz Para Caminho (Light for the Path), BTGMI’s Portuguese ministry, and he walked with the couple through membership classes at Fairlawn CRC in the following months. On Sunday, February 11, Fernando was baptized and both he and Pamela, who had been baptized in Brazil, publicly professed their faith in Jesus at Fairlawn CRC.

The service opened with a call to worship from Psalm 29, in both English and Portuguese, to welcome Fernando and Pamela and the large group of Portuguese-speaking friends who joined them for that special Sunday.  Weberton Figueiredo, a former CRC church planter who had worked with Brazilian immigrants in Massachusetts, helped to translate the baptismal liturgy into Portuguese, and afterward the congregation sang “In Christ Alone” in both languages.

Fernando and Pamela are active in the congregation, and often invite friends from the area’s large Brazilian community to their new church. At Fairlawn, these friends will find copies of the Cada Dia in Portuguese next to the Today devotional in the church’s literature rack. Pastor Joel notes, “One of my passions is encouraging churches like Fairlawn that have been around for 50 to 75 years, especially those in communities that are changing around them. It’s good to know that resources are available to help us connect with our neighbors and have them see Christ through us."

The Journey Continues: Equipping the Global Church through Media and Seminary Training