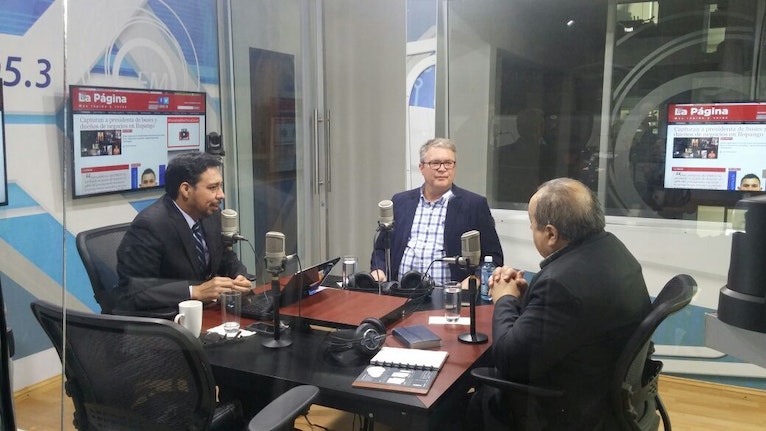 Julio Rodriguez wanted to be a journalist from a very young age. His parents supported him in this dream until his father left the family and, sadly, his mom passed away.

But Julio didn’t give up.

He shared his story with Back to God Ministries Director Kurt Selles during a ministry visit to El Salvador in February. “When I first met Julio at the station where he broadcasts our Spanish radio and TV programs, I had no idea how far he had fallen or the miracles God had worked in his life,” says Kurt. “He radiates energy and resilience.”

Julio shared that by God’s grace he was able to attend college and study journalism. His wife, whom he met at the college, also supported his dream and stuck with him through some very difficult years.

A prestigious media company offered Julio a job, and life would have been good, except, Julio says, “I experienced a great fall.”

Julio became addicted to the drugs he had been using. About this time he connected with a former professor, who was a Christian. The professor shared his faith with the broken man and Julio embraced Christ. He tried to live out his new faith.

In every area except the drugs.

Because of his addiction, Julio says, he fell all the way to the bottom. He lost everything. His job, his home, members of his family – except his wife and one of his three sons. Julio was living on the streets, alone, but his wife didn’t give up on him and his son kept in close contact.

Julio’s son was instrumental in helping him renew his faith and put his life together again. Because of his skills, the media company where Julio had worked offered him a second chance. God has effectively used Julio’s strong witness for Christ in his work with radio, television, online resources. During this time Julio discovered the BTGMI Spanish ministry.

Spanish ministry director Rev. Guillermo Serrano introduced Kurt to Julio. He has worked closely with Julio since they met at a Communications Training Conference hosted by Ministerio Reforma, BTGMI’s Spanish media ministry.  “He is a strong Christian and not ashamed to bring his faith and work together,” says Guillermo.

“I appreciate Ministerio Reforma because you speak biblical truth to every area of life,” Julio told Kurt. “You helped shape my faith and ministry.”

Over the past three years Julio experienced more tragedy; his faithful wife passed away from cancer and his son died suddenly last year.

In spite of the difficult events, Julio continues to live out his faith in his work and ministry.

“I was thankful for this opportunity to meet with Julio to discuss ways Christians can communicate truth in culture,” Kurt says. “We’re grateful for his partnership in ministry.”