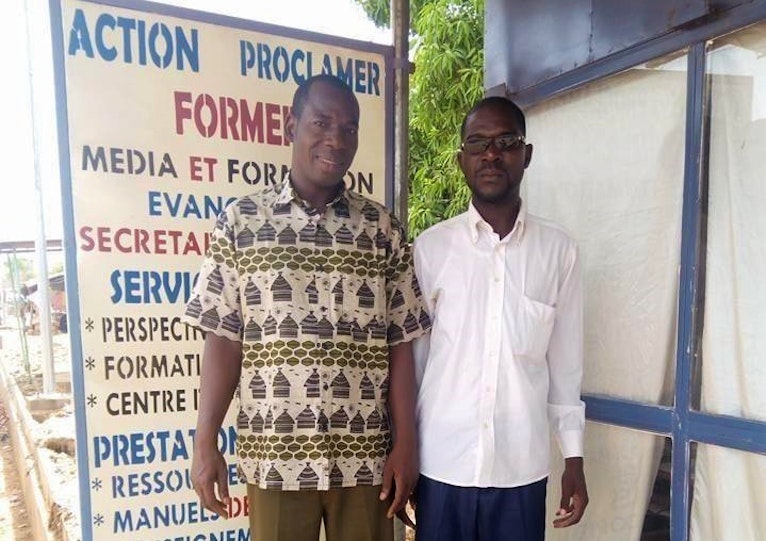 One year ago, Gregoire’s life looked quite different than it does today.

“He cried out to God, saying that if God would save him from prison, he would rededicate his life to Him,” said Marc Nabie, French Ministry Coordinator for ReFrame Ministries in Burkina Faso.

Then in December 2017, four years into his sentence, Gregoire was released.

He didn’t forget the promises he made, but life outside of prison quickly became tough.

Gregoire had a hard time finding work after being released, and when he was finally hired as a housekeeper, his boss took advantage of his situation and didn’t pay him for four months. Gregoire considered returning to life as a thief, so that at least he would have some money to survive.

On the day he left his unpaid job, Gregoire turned on his radio and landed on one of ReFrame Ministries’s broadcasts in French. The topic was the Lord’s Prayer.

“He called us immediately and requested an appointment,” recalls Nabie. “We met him the next day and he told us his story.”

After praying with Gregoire, Nabie and the other members of BTGMI’s French ministry team in Burkina Faso wanted to help him. Still, they weren’t sure of the best way to do that. They asked supporters in North America and around the world to pray as they sought God’s wisdom.

Following a time of discernment, the French ministry team decided to help Gregoire get connected to a local church and even helped him find housing and a job.

Today Gregoire leads the youth choir at his church and helps our staff in West Africa translate their French sermons into Mooré, one of the official regional languages of Burkina Faso.

“What a blessing to see him every Sunday serving the Lord with joy!” said Nabie.

Continue to pray that Gregoire will grow in his faith as he uses his gifts to share God’s Word through media. You can hear Mark share Gregoire’s story firsthand by watching the video below.

No Longer an Orphan

Torn Between Love and Abuse