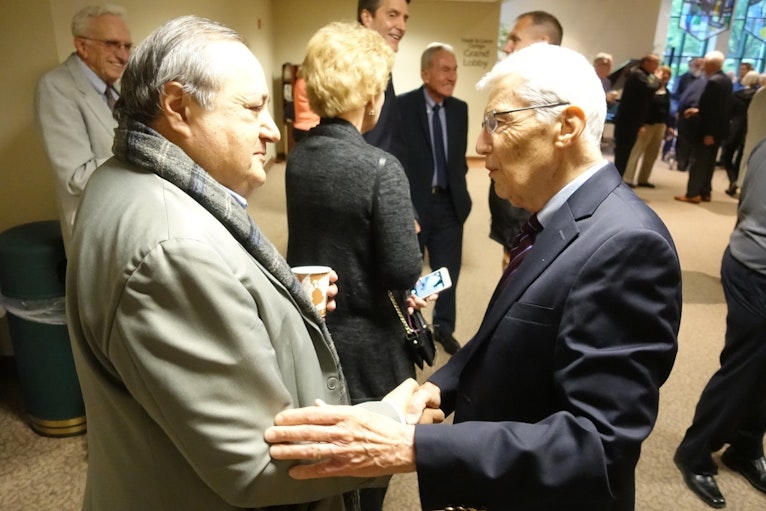 More than 40 years ago near Chicago, microphones switched on at a new studio. Since then, audio messages, choir anthems, and television programs recorded in that studio have proclaimed the Gospel through the airwaves across North America and around the world.

This was, and still is, the core mission of ReFrame Ministries (BTGMI).

Just a short walk from that recording studio and its surrounding building, people from the Chicago metropolitan area gathered at Trinity Christian College's Ozinga Chapel on Sunday, May 20. There, the group celebrated God’s work through BTGMI, singing By the Sea of Crystal, the hymn used to close BTGMI’s flagship radio program, the Back to God Hour. They also looked forward to the future ways that He will use the building through its new owners—Trinity Christian College.

Trinity formally signed the purchase agreement for the building in December 2017. Meanwhile, BTGMI has moved its main location to within the CRC’s Grand Rapids headquarters.

With liturgists, speakers, and worship leaders from both BTGMI and Trinity, the event continually pointed to the words sung in one of the event’s hymns, Great is Thy Faithfulness.

“We thank you, Lord,” Trinity’s Aron Reppmann shared in part of the litany he wrote and offered, “for the media ministry that emerged from this community and stretched out to embrace your whole wide world. We thank you, Lord; for Christian higher education that relies on and deepens all of these communal gifts.”

Kurt Selles, director of BTGMI, reflected on the ministry’s history and roots in the Chicago area. Selles also made clear that though the ministry headquarters has moved to Grand Rapids, the focus on using media to proclaim the Gospel, disciple believers and strengthen the local church remains the same as when the ministry began in 1939.

As the former BTGMI building is located right at Trinity’s main entrance, Trinity President Kurt Dykstra shared the college’s vision for using the building as a "front door," a space for welcoming visitors, alumni and prospective students.

In Grand Rapids, BTGMI is building a new recording studio within the CRC’s headquarters scheduled for completion in September. Meanwhile, program staff are recording ministry programs with partner ministry Words of Hope.

Pray that through both BTGMI and Trinity, people will respond to the same challenge offered by Trinity’s chaplain, Bill Van Groningen, at the event’s benediction. “Continue to proclaim the creative and saving wonders of the Lord here at home and around the world. Invest in each emerging generation, equipping them to pursue the joy of their vocation as the people of God.”

Building Up Media Ministry in Egypt