Ukrainian Churches Uniting for the Reformation 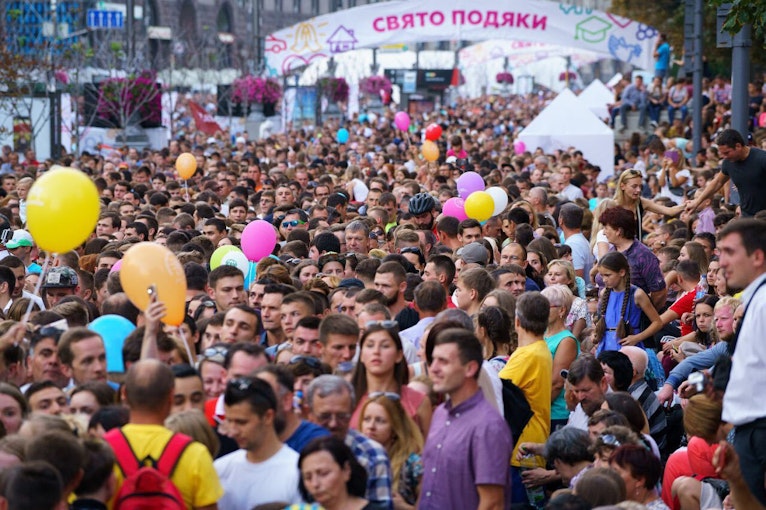 When the Ukrainian government announced that the country should celebrate the 500th anniversary of the Reformation, it was mainly for historical and political reasons. But the ReFrame Ministries Russian staff and ministry leader, Rev. Sergei Sosedkin, saw a different opportunity—a means to spread the Gospel.

A year ago, the BTGMI Russian team started dreaming of what an outreach event commemorating the Reformation could look like. “We wanted it to be more about sharing the Gospel with the community, not just the history of the event. Our primary focus being on the power of Hope in Christ, and the second on churches coming together.” says Sosedkin.   “We originally hoped for 2,000, maybe 3,000 people to attend.”

As the team engaged partner churches in the planning process, they began promoting the celebration through free concerts and small public events. Church interest in the event increased and others wanted to participate. As a result, for the first time in this area, around 40 evangelical churches of multiple denominations came together for the cause—a rather historic event itself!

Though the churches had differing opinions on some event details, BTGMI local staff was able to smooth over divisions through weekly meetings with the around 40 churches, focusing on prayer and unity in mission.

As the event drew near, planners put into place side attractions for people of all ages and needs, invited musicians, and engaged speakers for the event. In all, the cost of the event was growing to hundreds of thousands of dollars, which was raised almost entirely from local churches and businesses.

On Sunday, September 17, Kiev’s main street was shut down as it typically is on the weekends, but on this day it witnessed a staggering amount of pedestrian traffic. Under the beautiful open skies, an estimated 300,000 people attended the Reformation 500 celebration. It spanned an entire day, opening and closing with worship services. Both secular and non-secular media covered the event and were amazed at the turn out. They even provided live streaming of the event.

“The majority of the attendees were non-believers,” reports Sosedkin. “A special focus was made to invite and accommodate the needs of those with disabilities as well, which is not common in Ukraine. The main speaker, who himself has multiple disabilities, drew a large crowd.”

Seeing something that began as a dream on a much smaller scale grow into a vast opportunity to spread the Good News, Sosedkin commented, “It was humbling to be part of this opportunity to share the Gospel as people caught the vision and made it their own. That has always been my hope for our ministry. To work in tune with the needs of the local people, and multiply the effect as churches take over and work together to proclaim the Gospel."

A Celebration of the 500th Anniversary of the Reformation