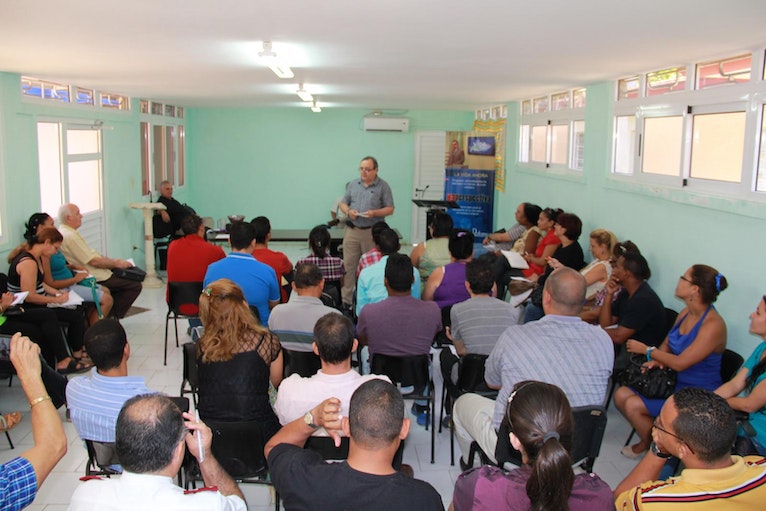 Back to God Ministries Spanish team enjoyed an unprecedented opportunity to visit Cuba to provide training for pastors, evangelists, leaders and teachers. Fifty people attended the workshops in Havana the first week of October and later that week another fifty participated in the training in Jaguey Grande, ninety miles south of the capital city.

“I never dreamed that this opportunity would come,” said Roberto, who has been a faithful listener of our radio program through Trans World Radio for the last 40 years. “Since the beginning of the ministry I was there, tuning in the radio to hear what the study of the Bible would say to me in the biblical and fresh way you do.”

Even though certain radio signals are restricted and Internet is only accessible to an elite few, for years listeners have accessed BTGMI Spanish programs through other sources.

Maria, who listened for many years through HCJB short wave from Ecuador, said she was glad to put a face to the voice on the programs. “It’s such a privilege to meet you,” Maria told BTGMI Spanish ministry leader Rev. Guillermo Serrano. “I have been listening for so many years and I never imagined I would have such an experience. I ask that God will continue blessing you and using your ministries to bless so many families here in Cuba.”

“We’ve presented the leadership training workshops in many other countries over the past 11 years, but this is the first time doors have been opened to Cuba,” reports Serrano.

Five BTGMI Spanish trainers plus BTGMI director, Rev. Kurt Selles, conducted the media workshops on this island country where the vast majority of the population is atheist or agnostic. “We were struck by the contrasts in the country,” notes Selles. “In some ways the Cuban people are living in in the past. Most of the cars I saw were from the 50s-60s era.”

Even though the Cuban government still jams certain radio signals and fewer than 1% of the population has access to Internet, expectations are high in the Christian communities of Cuba. “Following the workshops,” adds Serrano, “believers anticipate having the opportunity to proclaim the Gospel inside Cuba through the potential of access to mass and social media to connect with the world.”

Serrano is encouraged by the connections made in Cuba. “As we look into the political and diplomatic relations between the U.S. and the island, we believe any change is possible. But meanwhile we look for future possibilities to help Christian leaders in Cuba with training and development in a technological era. As the Lord gives us opportunity, we will offer them resources to proclaim the Gospel.”

Doing What God Prepared Him to Do