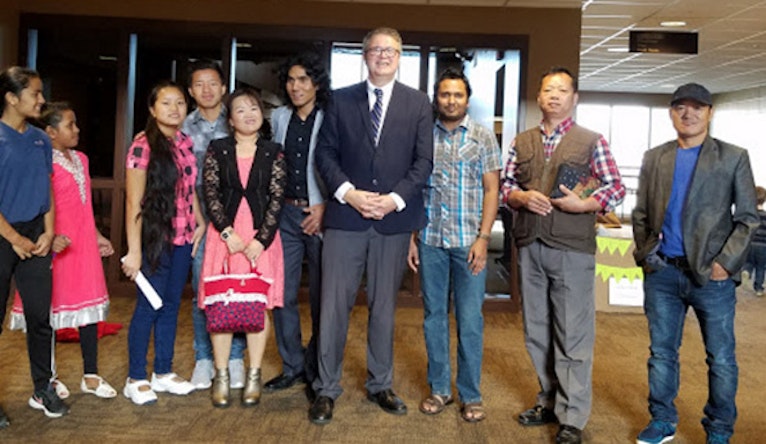 The refugees come from the tiny country of Bhutan, a Buddhist hermit kingdom tucked in the rugged Himalayas on the edge of India. During a period of ethnic cleansing in Bhutan in the 1990s, members of certain tribes fled to Nepal, where they lived in camps before receiving asylum in the U.S.

Rev. Kurt Selles, director of ReFrame Ministries (BTGMI), had the privilege of sharing lunch with these refugees last November. “They asked me to talk about Back to God Ministries’ work in Bhutan,” Selles reported.

He had just returned from a ministry visit to Bhutan, so he showed them pictures and shared the story of seven young people he had met there. These young people had heard about Jesus for the first time through BTGMI’s ministry in northern India and the Himalayan region. After a period of follow-up with our Bhutanese staff, the young people came to confess Jesus as their Lord and Savior.

The Sioux Falls Bhutanese community has strong ties to their homeland. They expressed gratitude for the Gospel outreach through media happening in Bhutan. “They were moved to see that God loves Bhutan,” Selles added.

Selles asked the group to continue praying for the BTGMI ministry in Bhutan. He is hoping that our ministry leader in India can go to Sioux Falls to meet with that group and with First CRC.

“When we prayed together before I left, we all felt a deep sense of blessing and gratitude for God’s work, for his power in using media and, above all, for the power of his Word to change lives, even in difficult places closed to the Gospel.”

Your partnership with ReFrame Ministries makes a difference around the world. Please support the opportunities for sharing God’s love in Bhutan and many other places.

A Marriage on Fire