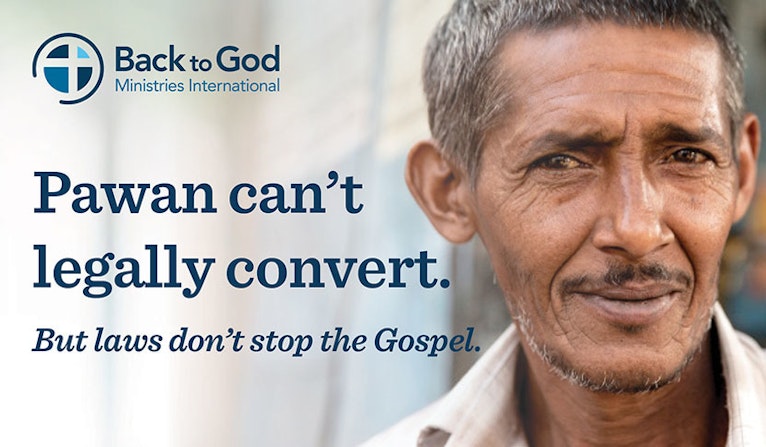 Our Hindi ministry team in northern India meets regularly with seekers and Christians who listen to their radio and internet programs, but don’t have a regular form of fellowship with one another.

At one such event, Pawan (his first name is omitted for his safety) shared his powerful story with the ministry team and about 35 listeners from his area.

“Pawan grew up worshiping spirits and would eventually start telling the fate of the people using black magic,” shares our Hindi ministry leader. “People would come to him with their issues and learn their fate.”

Gradually, Pawan said, he himself became a victim of black magic.

“Evil spirits possessed him and tormented him,” BTGMI’s Hindi ministry leader said. “Slowly his body became very weak and stiff. He had multiple diseases, and doctors told him that he would never heal.”

Confused and hopeless, Pawan came across a flash drive that a friend had given him. On it he found programs produced by BTGMI’s Hindi ministry team. His curiosity piqued, Pawan visited a Christian who lived nearby to learn more.

Pawan prayed for physical and spiritual healing. Not long after, he was healed.

“Pawan believed that Jesus is Lord,” our Hindi Ministry leader reported. “And God in his matchless grace delivered Pawan from all his bondages.”

Well Pawan believes and accepts Christ, he cannot legally convert. New laws in India make it impossible for people who were born into the Hindu faith to do so. These laws are especially enforced in the part of India where Pawan, and many of our ministry followers live.

But laws don't stop the Gospel. God has used Pawan to be a living testimony to others in his community.

“He is continuously witnessing his faith and testimony to many other people,” our ministry leader said. “He lives in a small village and it is difficult for him to go for Sunday fellowship. During our seeker meeting with Pawan's village, we introduced flash drives like the one he first encountered, and he was excited to share them with others.”

The Need for Jesus in China Seems Bigger Than Ever Before