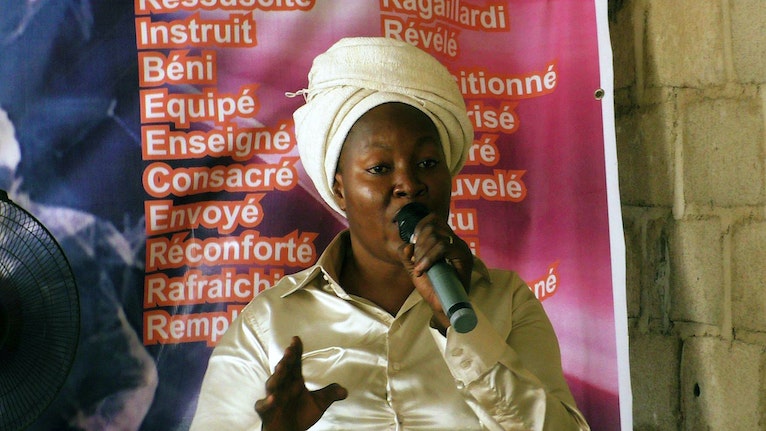 After 26 years of marriage, Samira had had enough.

Most people knew Samira’s husband for his leadership roles in their church, but behind closed doors, he was abusive. As a wife and mother living in Burkina Faso, Samira felt helpless. While programs exist in many parts of the world to support women in Samira’s situation, there were next to none in her community.

“Often when a woman in Burkina Faso has children with a man, she doesn't want to leave him no matter what,” said Rev. Marc Nabie, BTGMI’s French ministry coordinator in Burkina Faso. “Socially, divorce is not well-taken, and most women depend on their husband financially. So where would they go if they leave?”

Samira’s feelings of helplessness are all too common in the country. In response, Nabie and BTGMI’s French-language ministry team created an entire radio series, From Harm to Blessing, dedicated to marriage issues. In these programs, Nabie and volunteers such as Mrs. Nacro (pictured above) discuss God’s vision for marriage and help couples build a biblical foundation for their relationships.

Samira first heard Nacro’s voice on the air during a radio message about wounds and healing. The message helped Samira realize that how her husband treated her was not OK. She also realized that even if her husband did change his behavior, she would never be able to forgive him without God’s help. She reached out to Nacro for help in taking the next step. Nacro invited Samira into her home, where Samira quickly broke down. Soon, both women were crying, and Nacro offered to pray for Samira.

“The two spent almost seven hours together that day,” said Nabie. “They prayed with all their heart for the salvation of her husband, that Samira would have courage to speak up for herself, that her husband would be able to change his behavior, and that God would help Samira forgive him.”

The day of prayer didn’t change Samira’s husband in an instant, but God began working in his life. After weeks of more counseling and prayer with Nacro, Samira reported something amazing. “Her husband went down on his knees in front of her and their children,” said Nabie. “He begged for their pardon, crying.”

Because she had already prayed about this and told her husband how she deserved to be treated, Samira was able to reach out in forgiveness.

Stories of transformation like Samira’s and her husband’s don’t happen in every marriage. For every couple like this, the ministry team meets several others who aren’t in a position to reconcile and restore their marriages.

“Not every relationship is healthy enough to find a place of restoration,” said Koster, speaking from her Family Fire experiences. She points out that it may be necessary for one partner to leave a marriage when it is an abusive situation.

“Restoration is the ideal, and it’s what we’re called to strive for, but the reality on this broken side of heaven is: it’s not always possible when you have people enmeshed in addictions and abusive habits and behaviors,” she said.

BTGMI’s French-language ministry team has been overwhelmed with listeners who want to follow up with them for support. For many people, the ministry team is the only place to turn.

A Faith Across Generations