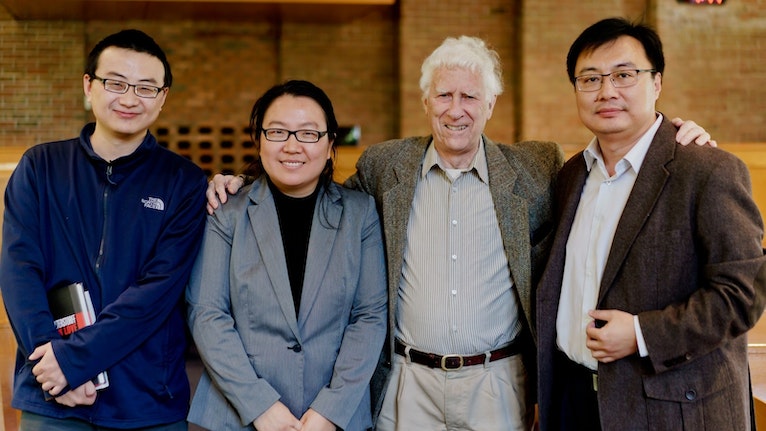 Students often hear a common but not always polite question: “What are you going to do with that degree when you graduate?”

The question can leave some students stumped. For Chinese students at Calvin Theological Seminary, the answer can be even more uncertain.

“If we still have a church, I’ll be a pastor,” said Paul Wang, a seminary student, alluding to a recent increase in Chinese-government scrutiny over churches in China.

Still, for Wang and other students in his situation, it’s worth the risk to move to the United States to gain some perspective and leadership experience.

To further resource these students at Calvin Seminary, Pastor Jerry An, Chinese ministry leader for ReFrame Ministries (BTGMI) connected with them to offer media resources produced by his team.

Recently An shared a new video series featuring four great Christian thinkers. Collectively and affectionately they are known as “Calvin’s Beatles,” since they all taught at Calvin College at one point in their lives. They are philosophers Alvin Plantinga and Nicholas Wolterstorff, historian George Marsden, and theologian/philosopher Richard Mouw.

An worked closely with Julius Medenblik, president of Calvin Theological Seminary, and with Jin Li and Mary Ma, a husband-and-wife team from China who are currently studying at the seminary, to produce the videos. In addition, he included three other significant scholars in the Chinese version of the series: Emily Brink, Philip Holtrop, and John Cooper.

The videos were released on the Chinese social media platform WeChat in December 2018 and have already had nearly 200,000 views. BTGMI’s Chinese media team has now also released an adapted version of the videos for English speakers.

Wang finds the example of Christian philosophy offered in the videos especially helpful.

“It’s hard to say where theology stops and philosophy begins, and vice versa,” Plantinga said in the video. “I don’t think it’s important either that there be much of a boundary. Things Christian philosophers talk about could just as well be talked about in theology.”

A philosophy undergrad student himself, Wang said he enjoyed hearing from Christian philosophers in the videos and liked their sense of camaraderie.

“They all seem to have fellowship with each other,” he said. “In China, we usually have bad competition among academic circles, but [these Christian philosophers] have a sense of community, and I think that gives us in China a good example to live by.”

As Wang and fellow students learn from the Chinese version of the videos, Jerry An sees opportunities to strengthen the faith of English speakers as well.

“Both in China and in other places around the world, the videos help us answer the question ‘In these dark times, how do we live out our Christian lives?’” said An.

Your support for BTGMI's Chinese ministry is equipping worldwide leaders! Read how one of Wang’s fellow students at Calvin Theological Seminary is also using the videos.

A Tribute to Jerry Jonker