God of the … Ellipses 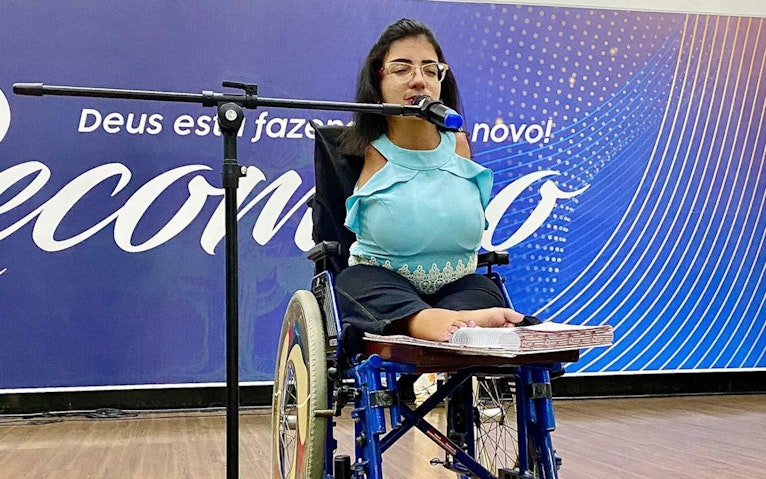 Solyana Coelho recently committed to returning to school to earn a second degree, this one in theology. As she continues her studies, pray that she will grow in her ability to share God’s Word.

Solyana Coelho in Brazil says she regularly thinks of God as the author and editor of her life.

“Our God is an expert in putting ellipses where we believe there should be a full stop,” Solyana adds.

Ellipses help us know that something is so important that it can’t wait until the next sentence to be mentioned. Solyana’s birth story contained ellipses:

When Solyana was born, doctors told her mother that Coelho would only have a few minutes before she would die ... but they were wrong.

Today, Solyana is 25 years old. And though she defied doctors’ expectations by living more than a few minutes, she had a long and difficult journey growing up.

Born without arms and with two malformed legs, Solyana had many surgeries over the years as well as near-death experiences caused by her condition. Through all of those trials, she maintained a positive attitude and even earned a degree in psychology.

Now Solyana has dedicated her life to sharing why she believes God saved her. Solyana is a gifted public speaker and a commissioned missionary. She regularly shares her story at churches across Brazil’s many denominations.

“God lifted me up to tell my story,” Solyana says. “Many people ask me how I can be happy with so many limitations, but the truth is that happiness isn't an equation, and it doesn't depend on any condition.”

As Solyana began her missionary work, she looked for inspiration and ways to grow in her faith. That’s when she found videos from Rev. Hernandes Dias Lopes, ReFrame Ministries’ Portuguese ministry leader.

Like Solyana, Rev. Lopes regularly visits churches across Brazil to share sermons and shorter biblical messages. Most of these messages, along with devotional programs and biblical videos, are posted on YouTube, where tens of thousands of people watch each one. These videos have become an integral part of Coelho’s devotional life and understanding of the Bible.

“Pastor Hernandes is one of the greatest spiritual references of our generation and one of the people I admire most in the world,” says Solyana.

More Than a Coincidence

“I'm sure this encounter didn't happen by chance, but rather as a precious answer to prayer,” said Solyana after meeting Rev. Lopes. “Our meeting, so special, is another proof—for myself—that God cares about everything that is important to me.”

Prayers in the Midst of Grief