Bringing Good Out of Evil in Burkina Faso 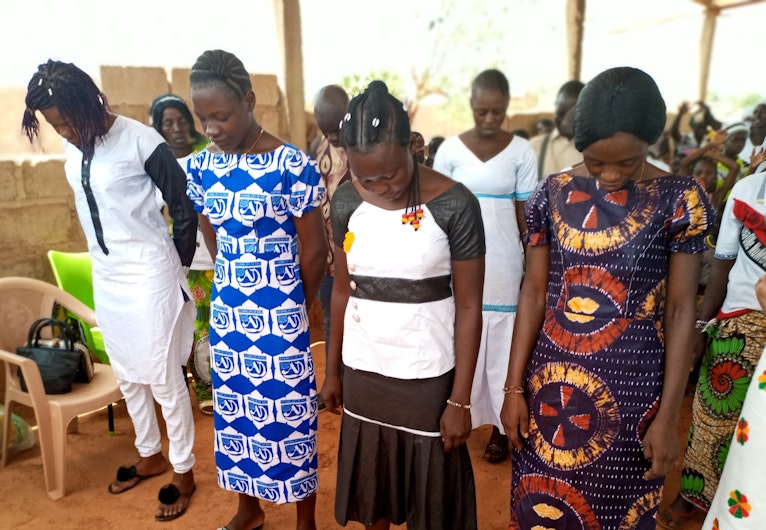 ﻿Rev. Marc Nabie shared stories of both salvation and suffering in West Africa at a recent webinar.

“God, even out of evil, you can bring good,” prayed Kurt Selles, director of ReFrame Ministries, during a recent webinar with Rev. Marc Nabie, ReFrame’s French ministry leader.

“Good out of evil” aptly describes the role that Nabie and his partners play in Burkina Faso and surrounding countries amidst years of political instability and violence. Not long ago, Nabie said he described Burkina Faso as a “poor but peaceful” country, however, beginning in 2016, terrorism has been on the rise, leading to further violence and political instability.

In the last year alone, there have been two coups d’etats in Burkina Faso’s capital, Ouagadougou. Over 1.7 million citizens are now displaced, fleeing from violence. Many pastors have lost their lives and over 500 churches have been shut down.

Despite these difficulties, Christian ministry goes forward in Burkina Faso—a country where 65% of citizens are Muslim.

When Nabie joined ReFrame's French ministry team in 2015, Christian ministry programs were being broadcast by two radio stations in Ouagadougou. Today, 12 radio stations broadcast Christian programs in Burkina Faso and nearby countries of Niger, Benin, Senegal, and Mali. Along with radio, Nabie also launched new programs online and, most recently, on television.

Good Out of Evil: Lives Changed Through the Airwaves

God is using ReFrame’s media ministry to transform lives. At the October webinar, Nabie shared that the difficulties of life in Burkina Faso have made many people, even Muslims, more open to the gospel. “They are questioning why other Muslims would choose to kill in the name of God,” said Nabie, “That’s why we believe now is the time for us to preach Christ and make him known.”

Nabie then shared the story of a church plant in Kaya, a northern town now home to many displaced citizens who have fled from military oppression.

“We received a lot of follow-up calls and messages from people listening to our radio programming in Kaya,” Nabie said, “so we sent a member of our team there to talk to listeners directly and organize a way for them to be discipled and worship together. After just 10 months, many more people have come to Christ. The church we planted now consists of 40 adults and almost 200 children. 21 people were baptized last Pentecost—and 8 of those were converts from our radio ministry.”

Every convert has a story, like Marion. Marion and her brother were forced to leave their village after it was attacked by terrorists and sought safety in Kaya. There they heard a gospel radio program and got in touch with David, ReFrame’s partner there. After meeting with David, and sharing their story, Marion and her brother prayed and accepted Christ. Both of them have been baptized and Marion still attends church regularly. Marion’s brother recently joined the army, hoping to combat the terrorism that uprooted him.

Joining Hands in Prayer and Support

Kurt Selles invited the webinar audience to ask Nabie a few questions about life and ministry in Burkina Faso, then led a time of prayer for these requests.

As the webinar concluded, Nabie thanked supporters of ReFrame Ministries.

“We thank everyone for your support,” Nabie said. “Without it, those like Marion and her brother would not know the good news of salvation. We are privileged to be able to help many not lose their souls—and you are part of this great adventure. Thank you for joining hands with us to reach all these souls for Christ!”

Learn more about the work of ReFrame Ministries in 55 countries throughout the world and receive invites to upcoming webinars by signing up for ReFrame’s email list.

Send the Gospel to Burkina Faso

A Trustworthy Partner in India