A Media Ministry in Japan 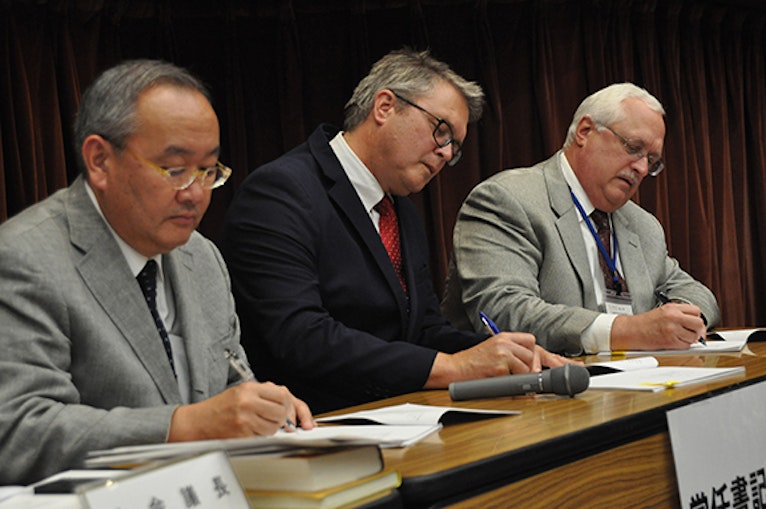 In an historic move, the Reformed Church of Japan (RCJ), Christian Reformed World Missions-Japan (CRJM), and ReFrame Ministries (BTGMI) signed an agreement to strengthen media missions in Japan, where less than 2% of the population openly professes faith in Christ.

On October 12, 2016, two hundred Japanese pastors and leaders gathered in Yokahama, Japan for the annual General Assembly of the RCJ, and unanimously approved the creation of the denomination’s first missions agency—a media ministry. This marks a transition of the current operations of the CRC Media Ministry, a partnership between BTGMI and CRJM, to the newly created and, more notably, locally managed RCJ Media Evangelism Office, effective January 1, 2017.

The vote was followed by a very moving and dignified signing ceremony of the contract by BTGMI director Kurt Selles, CRJM team leader Larry Spalink, and the RCJ moderator, Akira Komine. Komine challenged the churches to aggressively use all the media at our disposal for the spread of the Good News. He then led the assembly in a prayer of thanksgiving.

Reformed media ministry was initiated in Japan in the mid-1950s, when Rev. Henry Bruinooge, serving as a missionary through CRWM, began a new Gospel radio broadcast. In 1974, BTGMI joined the Japanese broadcast ministry partnership and Rev. Shojiro Ishii assumed leadership. He was succeeded in 1998 by the current Japanese media ministry director, Rev. Masao Yamashita.

Discussions leading to the new RCJ media mission agency began in 2008. After years of hard work by several RCJ, CRJM, and BTGMI ministry leaders preparing for this transition, BTGMI Director, Rev. Kurt Selles shared his enthusiasm for this agreement. “We are grateful for this next step. It’s an important one to take in ensuring self-sustainability of the ministry in Japan.”

The day after the vote, the RCJ installed Rev. Masao Yamashita as the new director of the RCJ Media Evangelism Office. Yamashita responded, "I'm so excited to reach such an important day. As far as I know, there is no denomination that has its own media evangelism agency in Japan. Pray that the Lord makes us His instrument to spread the Gospel among Japanese people."

BTGMI will continue to support and partner with the new organization to use media for proclaiming the Gospel in Japan. As this next chapter begins for the RCJ, pray that this new partnership for media ministry will bring many people to faith in Christ.

Christmas Around the World