Radio is not Dead 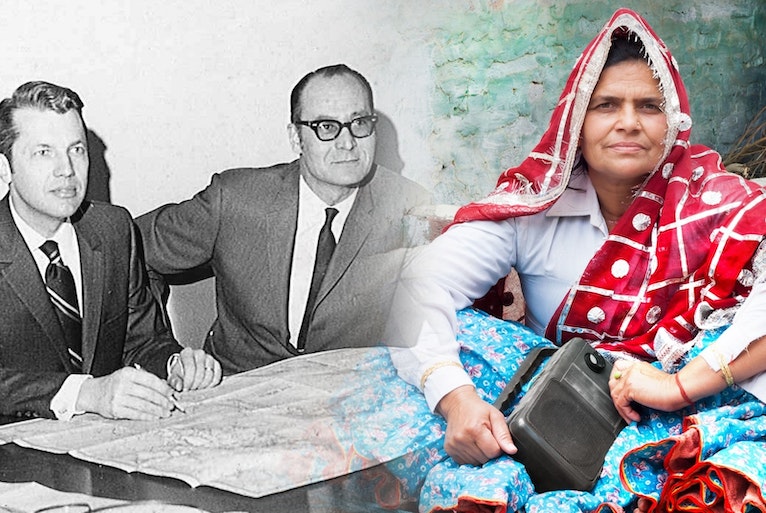 Times have changed since that first broadcast. People still listen to radios, but more and more often in North America, we get our news and entertainment via mobile devices, social media, and the Internet. That’s why much of BTGMI’s English ministry has switched to Internet-based programming. The same is true for many of BTGMI’s non-English programs around the world.

Still, radio is not dead. Just ask Prakash, Opung and Maria, who live in three parts of the world where BTGMI’s audio programs are still the most popular way to reach people with today’s media.

Clinging to the Light
Prakash lives in a remote village in India. One day, while struggling with the burdens in his life, he turned on his radio and heard a Christian song in his own language. The next day, he listened to BTGMI’s Hindi ministry broadcast and heard the name Jesus.

Day after day, he listened to the ministry’s broadcast. Now, even though he has faced pressure from non-believers in his community, Prakash has peace and trusts in Jesus.

“I don’t say that there won’t be problems in life once you begin to believe in Jesus, but you will have peace and strength to go through challenges,” Prakash told BTGMI’s Hindi ministry team.

An Outside Connection
Opung lives in North Sumatra, Indonesia. His radio is his main connection to the world outside his village. As a farmer, he spends his days on his feet tending livestock.

“In between his busy schedule, Opung takes time to listen to the radio,” says BTGMI’s Indonesian ministry team. “His life is more colourful because every day he can hear the Word of God from his radio.”

Relationships are Key
BTGMI’s audio programs currently air on more than 1,700 different radio stations around the world, about 700 of which are Spanish-language stations. Many of these stations air the ministry programs without charging their standard broadcast fees because of long-established relationships and training that BTGMI’s Spanish ministry team offers to radio staff. These cost savings mean more people like Maria, who lives in Costa Rica, can hear God’s Word from Back to God Ministries and the Christian Reformed Church.

“Thanks for your radio program that teaches the truth coming from the Bible in a practical way that I can apply in my life,” Maria shared.

Media Offers New Opportunities for People with Disabilities in China