Abhay* and his wife Priya* don’t hide the fact that they used to be Naxalites. 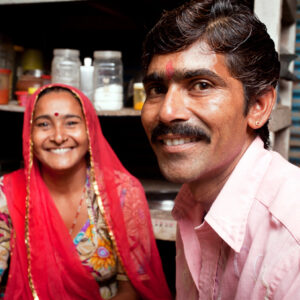 The Naxalites are a guerrilla terrorist group. They are violent, destructive, and corrupt. This group hates Christians and does not think twice about attacking them. Abhay and Priya were not just part of this terrorist group, they were leaders.

They don’t tell people about their violent past because they are proud, but rather because their story demonstrates the power of the Gospel. Their transformation shows how Jesus can work in any heart and give anyone new life.

One day, Priya heard about Jesus on Mahima Ke Vachan (Words of Glory), our Hindi radio program, which is supported by partners like you. Instead of being angry, Priya was intrigued. To her, the virgin birth seemed like an unbelievable story. She was sure it could not be true, and yet, she could not shake the desire to know more.

When Abhay and Priya heard our broadcast for the first time, because of the Truth they heard, their lives will never be the same. That’s why your continued support is so valuable.

Taking a risk, Priya went out and bought a Bible. As she read it, the Spirit worked in her heart and her skepticism melted away.

Convinced that every word of Scripture was true, Priya gave her life to Christ.

At the same time her husband, Abhay, who had also heard the radio broadcast, was filled with questions. He went to a local pastor who gave him a Bible and encouraged him to continue listening to Words of Glory. As he heard God’s Truth and read the Bible, Abhay’s heart was also transformed and he too gave his life to Christ.

After learning the truth about Jesus, Abhay and Priya left the terrorist group and turned their focus to being witnesses for the Lord. They have joined a church in India and encourage others to listen to our Hindi radio programs.

To continue spreading the Gospel to people like Abhay and Priya, please partner with us today!